Mata Vaishno Devi Shrine is one of the most sacred pilgrimage sites of Hindus, which is nestled at an altitude of 5,200 feet in Katra district in Jammu. The Shrine features a cave temple, which is devoted to the Goddess Shakti, having the presence in the form of 3 natural rock formations, known as Pindis, which symbolizes the 3 Goddesses.

These are Goddess Kali, Goddess Lakshmi, and Goddess Saraswati. They are present at a distance of 91 feet inside the rock shelter.

The temple is positioned on the Trikuta, which is a three-peak mountain which is about 12 km from mountain’s base. It is known to be believed that the temple is almost a million years old. The sacred cave of Vaishno Devi is 98 feet long, and it encloses symbols of varied Gods, Goddesses as per Hindu mythology.

Vakratunda Ganesha is the rock symbol present at cave’s mouth. Accompanying the Ganesh symbol, there’s the presence of symbols of Surabaya Dec & Chandler Day, which are also engraved in the temple. As per the saying of a legend, Bhairav ​​Nath was considered evil who was killed by Goddess, located on the entry point of the sacred cave.

So, the Vaishno Devi Yatra Package involves some of the best temples to visit

Situated 3 km away from Vaishno Devi Temple, Bhairavnath Temple is devoted to Saint who turned into evil called, Baba Bhairavnath. It’s believed that the Goddess herself promulgated that no Vaishno Devi pilgrimage is complete without your visit to Bhairavnath Mandir.

The temple offers picturesque views of the dense forest and rugged mountains. Horse rides are available for the upwards and downwards journey, in case you find it difficult to not walk the path or climb the slopy stairs. So, surely visit this place in the Vaishno Devi Tour packages.

Charan Paduka Temple is known to be one of the top religious sites, located approximately 1.5 km away from Banganga. As per mythology, Goddess Durga made a stop at Banganga, when Bhairav Nath was running after the Goddess to chase her. Situated at a height of 3,380 ft, the divine footprints site is one of the centre of attraction of the destination.

Located at a distance of 4.5 km from Charan Paduka, Ardh Kuwari is also one of the holiest sites and has its religious significance. Ard Kuwari is famous for its narrow cave which is 15 foot long called as “Garbha Joon”. The pilgrimage site is present at the midpoint while trekking to the main Vaishno Devi Shrine.

As per the beliefs, Goddess Durga hid herself from the evil Bhairav Nath for nine months in Ardh Kumari’s narrow cave.

The Banganga temple is one of the religious centers which is at a distance of 3 km away from Katra. According to the myths, Goddess Durga while on her way to Trikuta Mountains from Bhumika temple stopped at this place, as the Langur Veer was dehydrated. After seeing his misery, the goddess hit an arrow at the stone to generate a spring, which is now known as Banganga.

Jahan Kosha is also known as the Great Gun, which means World’s Destroyer. Janardhan Karmakar was the one who built this cannon.

It’s a cannon which is placed near Katra Mosque, Kadam Sharif in Topekhana. The mosque is known to the footprints of Hazrat Mohammad.

A lot of people were in shock to see the big and clumsy cannon, that was swinging at the 4 feet height. Later on, it was liberated from the roots of the tree. The cannon is made up of 8 metals including gold, silver, copper, lead, iron, zinc, tin, and mercury or ashtadahatu.

Dera Baba Banda is an ancient historic monastery which is 300 years old. It’s constructed on the banks of River Chenab in Jammu. The shrine is about 3 km away from Katra. The monastery is made in honor of Sikh Guru, Shri Guru Gobind Singh. The temple involves remains of Sikh Guru which includes an arrow, a bow, a sword, and other significant weapons.

The interior walls of the monastery are adorned with golden shade, with small carvings, adding royalty and richness to the temple.

The monastery is fenced by the beautiful, lush landscape covered in greenery in Jammu and Kashmir. Every year, Sikh devotees pay their visit to the temple from all around India to celebrate Vaisakhi festival here.

It’s believed that having pure mind and heart if take the dip in the lake, all your desired wishes will turn into reality. The temple is devoted to Lord Shiva and Baba Dhansar.

One of Vasudev’s son was Baba Dhansar. As per the legends, a demon was making trouble at Karua’s residence; Baba Dhansar then worshipped Lord Shiva to save the

Locals of the village. Lord Shiva then made his presence and killed the evil. Since then, people pray Baba Dhansar including Lord Shiva inside caves.

The temple can be reached after walking 200 m from the main road which offers scenic views to visitors. A large number turns out on the day of Mahashivratri. Also, in temple premises, there’s are small arrangements for Mela.

The religious Shivkhori Cave is located at a distance of 80 km from Katra. Shivkhori is a sacred shrine which is dedicated to Lord Shiva. “Khori” means cave and this cave is a natural formation which is 200 m in length, 1 m in width, and height is of 4 m. The Shiva Linga is claimed to be formed naturally. The cave features various natural things having a resemblance of God Ganesh, Goddess Parvati, and Nandi. Cave’s roof is shaped in the form of a snake from where water dribbles on Shivlinga. It’s believed that Shivkhori Cave was discovered by some Muslim Shepherd.

So, what are you waiting for? Pack your bags and get ready with Vaishno Devi Tour Packages from Mumbai!

Top 7 Most Beautiful Lakes to Visit in the United Kingdom 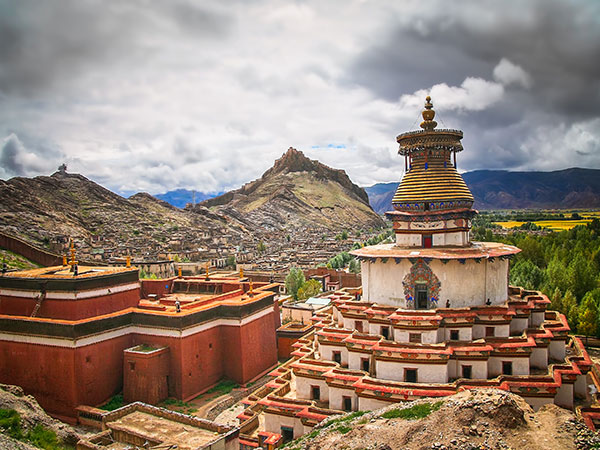 STUNNING PHOTOS THAT WILL MAKE YOU WANT TO TRAVEL TO TIBET